The COVID-19 response is pushing the federal deficit to record levels.

Under our latest projections, the budget deficit will total $3.4 trillion in 2021 – higher than last year’s record $3.1 trillion – and almost 3.5 times larger than the 2019 deficit.

Now that the American Rescue Plan Act has been signed into law, the federal deficit is on course to exceed $3 trillion this year, with debt reaching a new record as a share of the economy.

In February, under what was current law at the time, the Congressional Budget Office (CBO) projected the budget deficit would total $2.3 trillion in 2021, $1.1 trillion in 2022, and $1.9 trillion in 2031. Incorporating the direct effects of the American Rescue Plan Act, we project the deficit will now total $3.4 trillion this year – higher than last year’s record $3.1 trillion – and $1.6 trillion in 2022.

With the passage of the American Rescue Plan Act, we now project deficits will total $16.6 trillion over the 2021 to 2031 budget window, a $2.1 trillion increase over CBO's prior estimate of $14.5 trillion. Virtually all of this increase will take place between 2021 and 2026.

Measured as a share of the economy, the deficit will total 15.6 percent of GDP this year and average 4.7 percent over the coming decade. Previously, the deficit was expected to total 10.3 percent of GDP in 2021 and average 4.4 percent over the 2022-2031 period. As a share of GDP, the 2021 deficit will be the fourth highest in history, eclipsed only by three years of borrowing to fight World War II.

Importantly, these estimates do not take into account the indirect economic effects of the American Rescue Plan, which are discussed below. 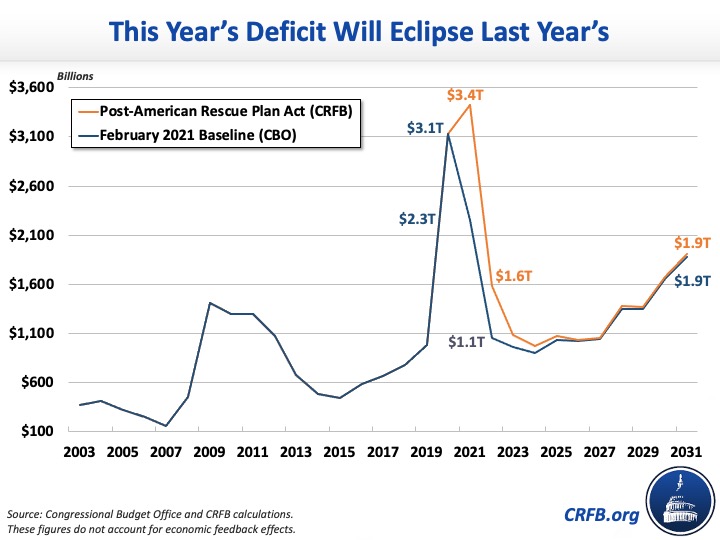 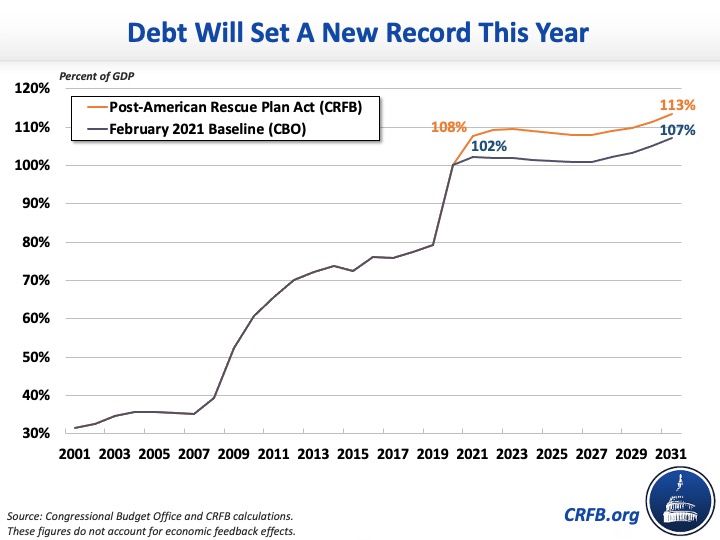 Importantly, these projections reflect only the direct budgetary effects of the American Rescue Plan Act and do not incorporate any potential indirect economic effects. In our assessment, the plan is likely to boost GDP, taxable income, inflation, and interest rates in the near-term relative to CBO's prior projection. On net, these effects could reduce our deficit projections by several hundred billion dollars over the next five years. Nonetheless, we expect debt to reach roughly 113 percent of GDP by 2031 irrespective of any potential economic feedback effects.

We'll continue to update our data as new reports and information become available. Subscribe to our email list for the latest in federal spending updates.